The latest products in the Evolution Wireless Digital family of radio microphones simplify professional workflows, delivering a digital UHF system that can be scaled with ease. 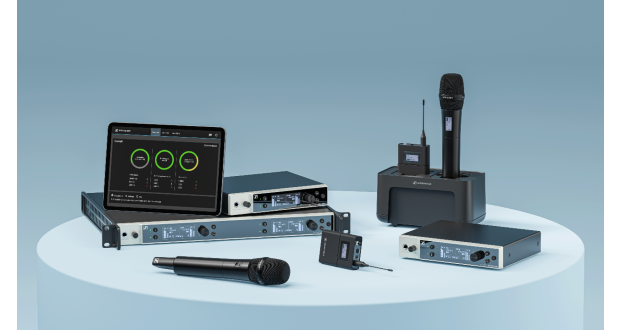 Sennheiser has announced the availability of the next system from its Evolution Wireless Digital family of radio microphones. Named EW-DX, the new microphone system simplifies professional workflows by utilising refined technologies to deliver a digital UHF system that can be scaled with ease.

“As the technological successor to our evolution wireless G4, EW-DX is designed for the most demanding business and professional applications,” said Michael Altemark, product manager at Sennheiser.

“Our latest digital wireless system solution is scalable, reliable and easy to install. EW-DX has an advance feature set that allows it to easily scale from the smallest meeting space or classroom to the largest business and educational installations.”

This week, the first flight of products started shipping from Sennheiser’s main warehouses in the US, Europe and the Asia-Pacific region. The following components are available as part of these shipments:

To coincide with the availability of EW-DX, Sennheiser has also released an updated version of its Sennheiser Control Cockpit software. With Version 6.0.0, Control Cockpit is now fully compatible with EW-DX, enabling monitoring, control and firmware updates for EW-DX devices.

For conformity, consistency and compatibility reasons, it is strongly recommended that the system be updated to the new release of Sennheiser Control Cockpit upon receiving the EW-DX. This will ensure stable firmware upon first use.

Control Cockpit continuously provides a global overview of all network-enabled devices, showing all status information at a glance and making setting adjustments for one or multiple devices at the same time easy.

For more information about Sennheiser Control Cockpit, additional details about the new features and to download the new version, visit here.

Sennheiser’s handheld and bodypack transmitters will also be the first on the market to feature e-ink displays. Even when a transmitter is switched off, users will still be able to read essential device data.

Both transmitter types will be fitted with in-device charging contacts. Using the dedicated BA 70 rechargeable battery pack, which can be charged using the L 70 USB charger (both BA 70 and L 70 USB are sold separately), the transmitters will have an operating time of about 12 hours.

In early 2023, Sennheiser will also add to the Evolution Digital Wireless family charging options with the availability of the network-enabled charger, the CHG 70N, which features two individual charging bays for the EW-DX, one of which can charge EW-DX SKM, EW-DX SK or BA 70.